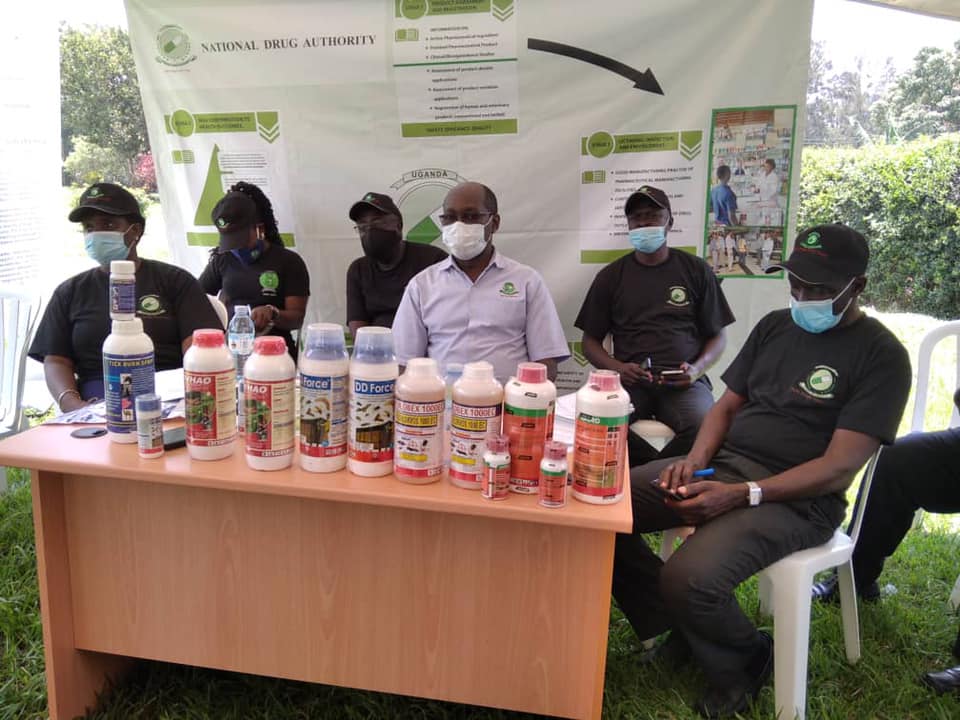 National Drug Authority (NDA) is a government agency with the mandate of ensuring that the population (human and animal) access safe, efficacious and quality human and animal medicines from licensed drug outlets manned by qualified personnel. It is in those licensed outlets that NDA can guarantee the safety and quality of medicines.
As part of NDA’s routine regulatory functions, NDA conducted surveillance on falsified and counterfeited veterinary medicines in the western Uganda districts focusing on Kyenjojo, Kiruhura, Sheema, Bushenyi, Rubirizi, Mitoma and Mbarara. This followed a tip off and complaints from some professional veterinary field extension workers and farmers in the affected districts like Bushenyi and Sheema whose animals were experiencing serious side effects following use of the falsified/ counterfeited veterinary purported “acaricide” called “TICK BURN SPRAY”.
The objectives of this operation were:
1. To apprehend persons involved in falsifying/counterfeiting Veterinary purported TICK BURN SPRAY “acaricides” and withdraw the same.
2. Sensitize and publicise about the dangers associated with sale and use of the purported TICK BURN SPRAY, FUMIGANTS AND AGROCHEMICALS that some farmers have resorted to, following ticks resistance to acaricides challenge.
This operation and enforcement is a continuation of the February 2020 operations that lead to arrest of seven suspects from the districts of Kyenjojo, Bushenyi, Mbarara and Ntungamo. These were found re-labelling, distributing and working with some drug shop operators, dairies, veterinary professionals and auxiliary staff in pharmacies. The mentioned centers have been reported to be aiding the sale, distribution and use of these purported TICK BURN acaricides, fumigants and agrochemicals in pretense of solving the ticks resistance to acaricides on some farms that have been affected.
The February 2020 operation succeeded in producing four suspects in the Magistrates’ Courts of Buganda road and Ntungamo where their trial is ongoing. These included the following.
However, with the continued NDA’s surveillance and with support from various stakeholder engagements, it was again discovered that the same vice of falsifying, supplying, distributing and use of the dangerous TICK BURN SPRAY putting the animals and people’s health at risk was still taking place and aided by some unscrupulous individuals fleecing the unsuspecting farmers in buying expensive dangerous chemicals that have left animals with bad effects and risk to the country’s economy.
This informed the formation of the ongoing February 2021 joint enforcement operation on the same TICK BURN SPRAY, use of Agrochemicals and Fumigants. This has succeeded so far in arresting 6 culprits from Mbarara and Sheema; where 4 of these have been aligned before court for prosecution in Mbarara and Sheema districts. These include the following.
Similar operations in other affected districts country wide are ongoing.
Items recovered during the operation included the following;
The counterfeiters do label highly toxic and dangerous chemicals not meant for use on skin of living animals like cattle, goats and human who spray the animals. The chemicals that are relabelled and sold to the unsuspecting farmers majorly lie in the category of highly concentrated fumigants meant for spraying bed bugs, cockroaches and bats. On the open market, these fumigants cost between 25,000/= and 35,000/= which are unscrupulously relabelled and sold to the unsuspecting farmers at a cost ranging from 100,000/= to 150,000/=.
The negative effects associated with use of TICK BURN SPRAY, Fumigants and Agrochemicals
It has been reported that majority of the farmers who have used the TICK BURN the purported “acaricides” and agrochemicals have left animals with the following adverse effects;
This is an indication that the use of these products is very dangerous and likely to affect the quality and price of Uganda’s animal products (milk and meat) at both national and international levels. The worse scenario is when the animal products are rejected in various markets yet animal farming is the major source of livelihood in the cattle corridor districts of Uganda. Therefore, tampering with this sector has social, economic, health and political effects.
Recommendations
The farmers are encouraged to consult qualified Veterinary professionals on drug use and to buy veterinary drugs from trusted sources which are authorized for sale of animal drugs which are closely monitored by NDA. Shun away from buying veterinary drugs from hawkers or shift markets, because such unscrupulous vendors are not knowledgeable and interested in fleecing the unsuspecting farmers.
With good farming practices, animals will acquire better treatment of animals’ diseases as well as prevention of diseases to protect and promote a healthy human and animal population.
Improve animal health and production to safeguard public health leading to improved economic gains for the farmers.
Report any suspected counterfeiting and any other drug related adverse effects, product quality and efficacy issues to National Drug Authority, District Veterinary Office (DVOs office), Veterinary extension Officers, Agriculture Officers for NDA’s follow up and feedback.
NDA extends its appreciation to the District leaders, the Uganda Police Force, the public and the media for their role during the ongoing activity, and appeal to the general public to be vigilant and report more of such cases on our toll free line 0800 101 999. Together we shall weed out the counterfeiters who are a risk to Uganda’s health and the economy at large.
Your safety is our priority. Safe drugs save lives
Categories: Latest News, Popular StoriesFebruary 25, 2021Leave a comment
Share this post
Share on FacebookShare on Facebook TweetShare on Twitter Share on LinkedInShare on LinkedIn Share on WhatsAppShare on WhatsApp

NDA engages with herbalists at their respective premises to enable them comply with drug regulatory requirements.
April 1, 2021 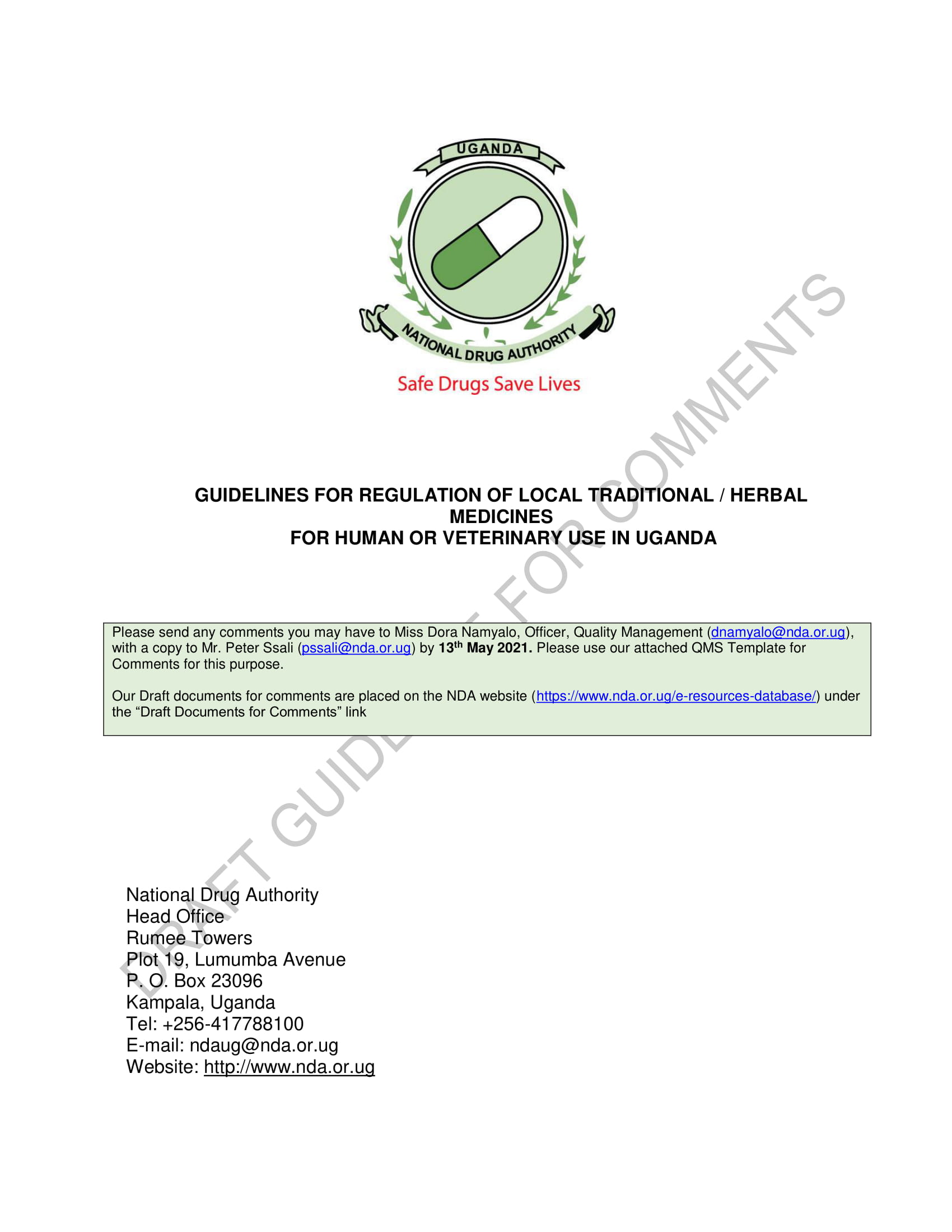