The Ministry of Health would like to inform the general public that it has concluded investigations into the suspected falsified vaccines found on the Ugandan market in March this year.

The Ministry wishes to inform the public that in March 2018, the National Drug Authority (NDA) during its routine post-market surveillance visits picked from High Street Mbarara Municipality, about 48vials of hepatitis b vaccines with standalone labels similar to those used to label the 10ml multi-dose Hepatitis B Vaccine manufactured by the Serum Institute of India (SII).

This finding raised suspicion of possible falsification of that particular packaging unit of the vaccine, leading to a series of operations by NDA in 18 drug outlets mainly in Western and Central Uganda.

Altogether, 196 suspected falsified 10ml units of the Hepatitis B Vaccine purportedly manufactured by the Serum Institute of India were confiscated by NDA and forwarded to its Quality Control Laboratory for further investigation.

Also, pre-printed vaccination cards, labelled with Sanyu Medical Center branding were recovered. The cards in question were said to be part of a batch, previously used in an immunization camp at Mbarara University.

NDA, together with other stakeholders such as Ministry of Health, Uganda Police, National Medical Stores, Joint Medical Store, Health Monitoring Unit and Ministry of Internal Security, then embarked on an extensive investigative process to, among others to establish;

Laboratory investigations and findings by NDA

At NDA’s Quality Control Laboratory both samples were subjected to Visual inspection tests and Physio-chemical tests:

i. Both the suspected and genuine 10 ml multi-dose samples had major similarities in physical appearance, notably: primary packaging material and bottle closure systems.

ii. There were visible differences observed between the legitimate and suspect samples in external labelling.

iii. Both samples returned similar pH and extractable volume results, as per the manufacturer and the United States Pharmacopeia (USP) specifications.

In an effort to further investigate and establish the actual ingredients of the falsified Hepatitis B, the Ministry sought assistance from the World Health Organization (WHO) and testing by United Kingdom’s Medicines Health Products Regulatory Agency (MHRA).

Additionally, NDA also reported to the World Health Organization (WHO) through the Rapid Alert System (RAS) and worked closely with the RAS team to develop and disseminate an international alert for the falsified Hepatitis B vaccine to especially the neighboring countries.

WHO also offered technical assistance to NDA, to do further confirmatory tests at MHRA’s laboratories. Tests from MHRA discovered the following:

Monitoring For Side Effects:

NDA has made efforts to monitor side effects amongst those who received the falsified vaccines but none have been reported and identified. Other events reported in the media were investigated by NDA and found not to be related to the vaccine.

Batch 035L5012 was tested at laboratories in India and according to a 27th July 2018 testing certificate, the falsified vials were found to have less potency levels than the recommended specifications and or potency.

Based on laboratory and visual tests conducted by NDA, MHRA and SII; and based on the investigations done by the Uganda Police and Security agencies, we wish to make the following observations and conclusions:

a) This falsified vaccine had several visual similarities with the Government-issued 10ml multi-dose Hepatitis B Vaccine manufactured by the Serum Institute of India (SII).

There was however some variations especially in the labelling and related details such as batch numbers, expiry dates, colour and design schemes. There was also a deliberate attempt in some cases to erase the red inscription “Government of Uganda- for public use, not for sale” and or complete re-labelling on the falsified vaccine.

c) There were strong similarities in the physio-chemical composition of both samples such as similar pH and extractable volumes. Although endotoxin and in-vitro potency tests showed some differences between the two samples, with the suspect samples returning lower specifications, the difference could have been as a result of poor cold-chain management of the suspect samples during the falsification process.

Given the above similarities, we believe that the falsified hepatitis B Vaccine was government-issued vaccine and was likely diverted and or stolen for sale to private health facilities.

d) Chemical tests done on both samples did not find any harmful Active Pharmaceutical Ingredients (API) that would be injurious to the recipients. Additional field monitoring confirmed no Adverse Drug Reactions (ADRs).

e) Given the reduced potency levels observed in the falsified samples, the falsified vaccine may not have elicited the expected immune response that is protective against hepatitis B infection for the individuals who received this vaccine.

f) We strongly encourage the public to scrutinise their vaccination cards so as to be sure if they visited the affected medical centres or received vaccines from the falsified batches and to consider re-vaccination at approved medical facilities.

b) Since a falsified hepatitis B Vaccine was found on the Ugandan Market; and this is not commensurate with our mission

Provide quality services to all people in Uganda through delivery of promotive, preventive, curative, palliative and rehabilitative health services at all levels,

The following measures are being undertaken;

iii)  To reduce the infiltration of poor quality medicines and health care products on the market, NDA is fast-tracking the establishment of its state of the art microbiology laboratory that will significantly increase the scope of testing.

iv)  To reduce on the proliferation of substandard and falsified medicines NDA is also widening its footprint especially at the border crossings. To this effect, NDA will in 2018/2019 have physical presence at all the one stop boarder point’s i.e Mutukula, Mirama Hills in addition to Busia and Malaba.

v) The increased usage of the Electronic Single Window (UESW) together with the National Drug Authority Management Information System (NDAMIS) which allows for the exchange of regulatory documents between the various government agencies involved in the export and import of drugs has further minimized forgery/falsification of documents, thereby checking smuggling but also quickening the process of importing the much needed drugs into the country.

NDA continues to work with the Uganda Police, on eight ( 8) cases which are at various stages of investigation and court hearing.

Ministry of Health would like to thank the public for your patience during this time and also to appreciate that drug investigation processes take some time because in most cases, the claim has to be proved. This usually involves collecting samples from the market of the product affected, testing samples at NDA Quality Control Laboratory or sometimes abroad depending on capacity as well as sending NDA experts to verify if the medicine was properly administered. Manufacturing facility and source of raw materials (active ingredients) used for producing the product are sometimes Investigated. In so doing, we have to rule out improper use of the medicine, poor storage and handling, and possibility of business rivalry.

We would also like to thank National Drug Authority who worked tirelessly together with other key stakeholders such as the World Health Organisation, Health Monitoring Unit of State House, National Medical Stores, Joint Medical Store, Uganda Police Force and the Ministry of Internal Security for their tireless efforts in bringing this issue to closure.

In the same vein we would like to strongly warn all those involved in the diversion and theft of governments medical supplies that they will be dealt with strongly.

The Ministry of Health would like to urge the public to increase their vigilance, not for just the hepatitis B vaccine but all medicines. All licensed dealers and pharmacies are required to prominently display their licenses at their premises. We also urge the public to be on the lookout for any suspected ADRs and or side-effects stemming from either Hepatitis B vaccinations and or any other drugs. These should be reported to NDA through their toll 0800 101 999 and also that of the Ministry 0800100066

Who is authorized to import vaccines into Uganda?
December 11, 2020 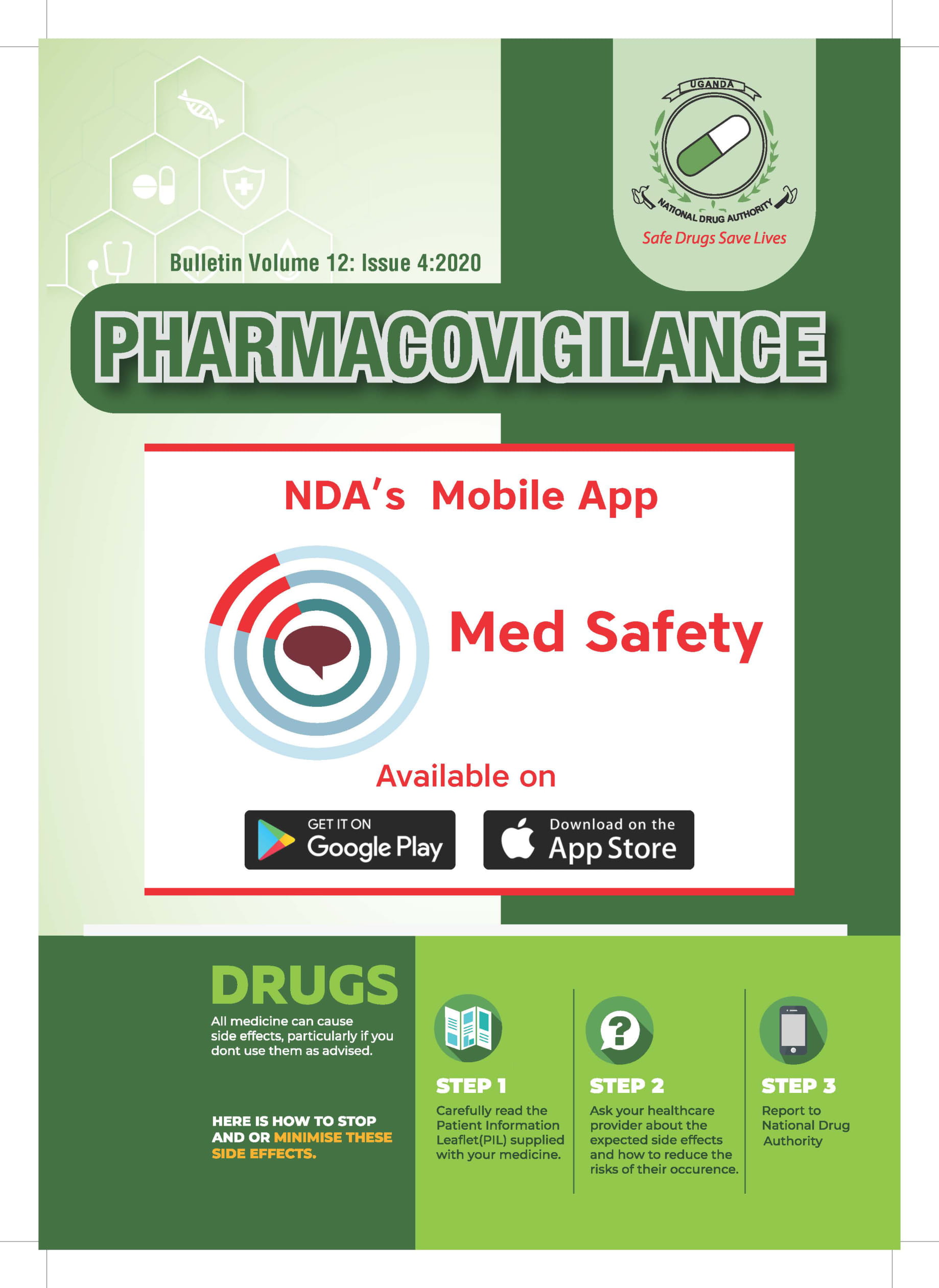