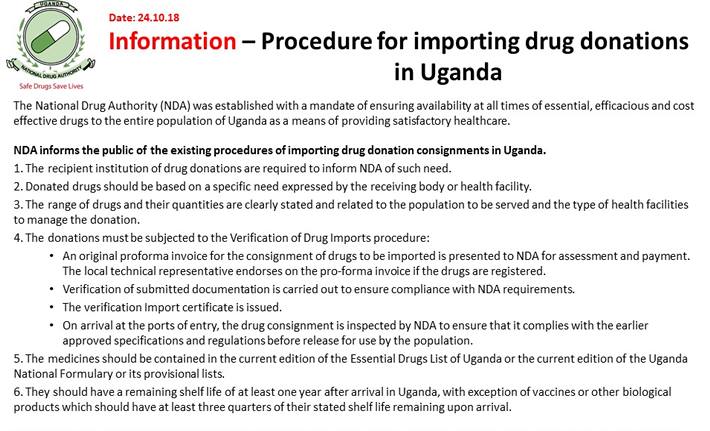 The National Drug Authority (NDA) was established with a mandate of ensuring availability at all times of essential, efficacious and cost effective drugs to the entire population of Uganda as a means of providing satisfactory healthcare.

NDA informs the public of the existing procedures of importing drug donation consignments in Uganda.

1. The recipient institution of drug donations are required to inform NDA of such need.
2. Donated drugs should be based on a specific need expressed by the receiving body or health facility.
3. The range of drugs and their quantities are clearly stated and related to the population to be served and the type of health facilities to manage the donation.
4. The donations must be subjected to the Verification of Drug Imports procedure:
An original proforma invoice for the consignment of drugs to be imported is presented to NDA for assessment and payment. The local technical representative endorses on the pro-forma invoice if the drugs are registered.
Verification of submitted documentation is carried out to ensure compliance with NDA requirements.
The verification Import certificate is issued.
On arrival at the ports of entry, the drug consignment is inspected by NDA to ensure that it complies with the earlier approved specifications and regulations before release for use by the population.
5. The medicines should be contained in the current edition of the Essential Drugs List of Uganda or the current edition of the Uganda National Formulary or its provisional lists.
6. They should have a remaining shelf life of at least one year after arrival in Uganda, with exception of vaccines or other biological products which should have at least three quarters of their stated shelf life remaining upon arrival.

Once again, NDA would like to assure the population that it is committed to providing the highest possible standard of health care to the entire population of Uganda through access to quality and safe medicines.