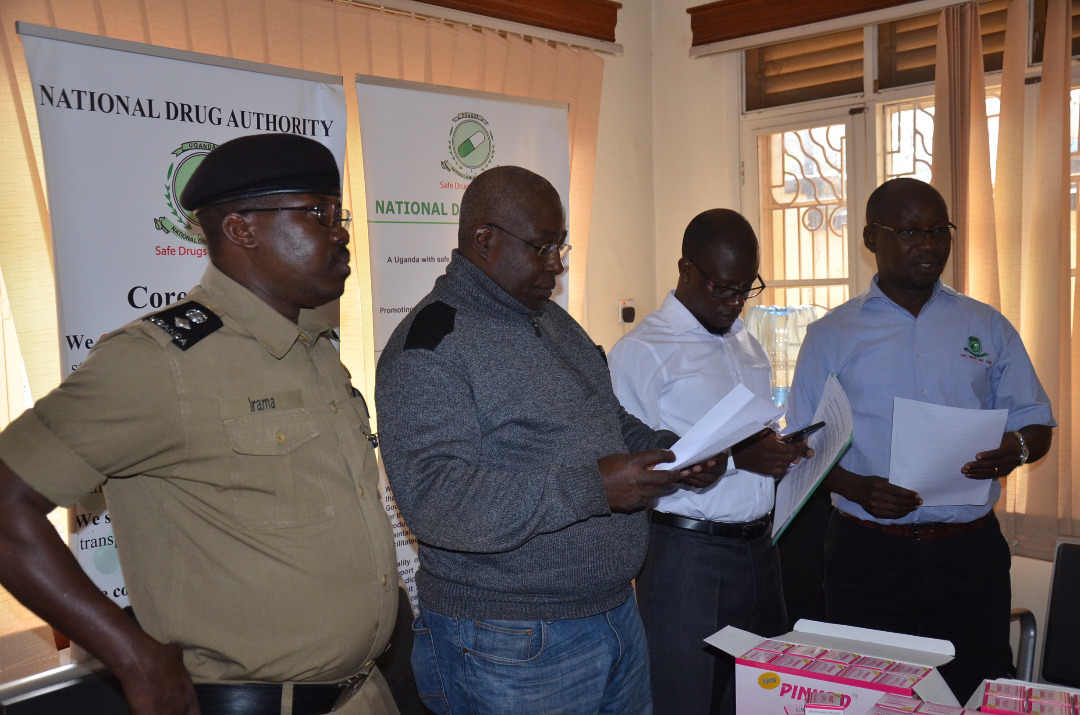 This was through closure of 138 drug outlets during the ongoing enforcement operation that begun on Monday 10, June 2018 and ending today Friday 14, June 2019.

The operation held in 14 districts led to inspection of 261 drug outlets, and 270 boxes of assorted medicine estimated at Ushs. 94,450,000 impounded from 138 drug shops. (Statistics to be adjusted after today’s report)

Closing 138 outlets saved the unsuspecting population from being conned by quacks or unqualified health personnel. This further promotes a quality health service delivery system resulting in better treatment of illnesses and prevention of diseases as the population access medicines from only licensed drug outlets manned by qualified healthy personnel.

There were 4 arrests made during the operation and all are in custody and are pending prosecution.

Many unlicensed drug outlets at various landing sites had evaded us for quite some time but the operation was very successful as we managed to apprehend them on landing sites like Bwondha, Kisenyi, Galilaaya and Kawongo.

We discovered 600 freshly supplied units of grip water that were about to expire, in Ntuuyo Drug Shop, Iganga town. Such drugs are a risk to the community as some unscrupulous individuals engage in relabeling.

The objectives of this operation are to save the public from unlicensed and unqualified personnel handling human and veterinary medicines, crack down on dealers in substandard, and counterfeit medicines, and hawkers of drugs.

Medicines in the hands of unqualified persons and stored in unsuitable conditions expose the population in the region and the entire country to wrong prescription, drug resistance, and other health related risks or complications including death.

This cumulatively brings it to a total of 1,206 drug outlets visited since the beginning of the NDA operations in March 2019, including other regions, leading to closure of 592, impounding 1,034 boxes of assorted medicines, estimated at Ush. 361,900,000 and effecting 38 arrests. The entire operation to date has protected an estimated 296,000 unsuspecting persons of unlicensed and unqualified drug outlet operators.

During the operations in all regions covered, veterinary outlets inspected were 71, and impounded 133 boxes of assorted medicines estimated at Ushs.72,200,000.

Challenges experienced in the course of doing our work included;

We appeal to the general public to be vigilant, appreciative, supportive of NDA in the course of doing our work, and urge you to report any anomalies on our toll free lines 0800 101 999. Safe drugs save lives