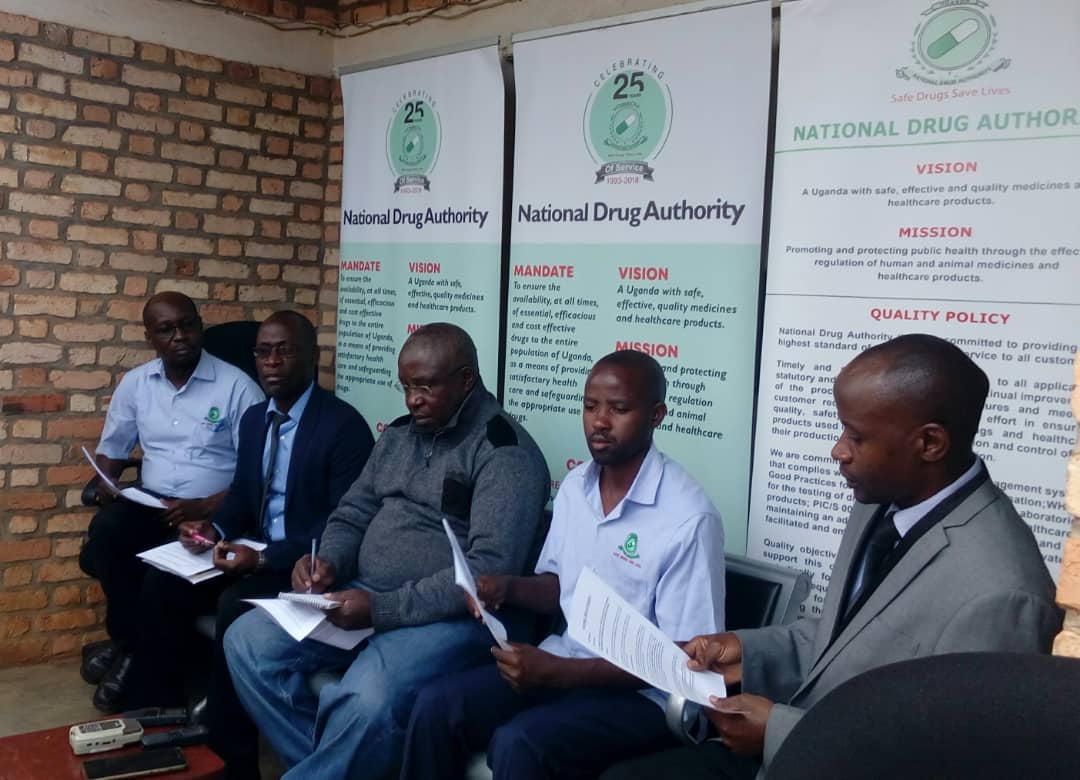 1. Introduction
National Drug Authority would like to inform the general public that it has been working jointly with Uganda Police Force to clear the region of unlicensed drug shops supervised by unqualified personnel.
The 5 days operation covered 17 Districts namely; Lyantonde, Kiruhura, Mbarara, Isingiro, Bushenyi, Shema, Rakai, Ibanda, Kamwenge, Kabale, Ntungamo, Rubanda, Kasese, Rubirizi, Mitooma, Kyotera and Buhweju.
2. Operation objectives and results
The objectives of this operation was to save the public from unlicensed and unqualified personnel handling human and veterinary medicines, crack down on dealers in substandard, and counterfeit medicines, and dealers in medicines intended for public health facilities, and crack down on hawking, poor handling and illegal advertising of medicines.
We would like to note that the results of the ongoing operations, lead to inspection of 281 drug outlets of which 46 where dealing in veterinary medicines and 235 human medicine. During the Operation we impounded 106 boxes of assorted veterinary medicine estimated at Ushs. 64,200,000 and 188 boxes of assorted human medicines estimated Ushs. 65,800,000. Of the inspected 281 drug shops, 108 were issued with closure notices and closed. Such quantities in the hands of unqualified persons and stored in unsuitable conditions expose human and animal patients to health risk like wrong prescription leading to drug resistance, other health related risks, loss of animal life and income of unsuspecting farmers.
3. Arrests
There were five arrests made during the ongoing operation. These include those operating businesses of pharmacists without a license, Government of Uganda labelled medicines, those doing illegal advertisements and hawking of medicines.
In Isingiro district at Endiize Town council, one Edirisa Katende was apprehended hawking and illegal advertising of herbal concoctions. He appeared at the Magistrate Court of Isingiro and was convicted on his own plea of guilty to a caution.
In Kiruhura district at Kinoni Town Council one Nkuranga Sam was apprehended hawking and illegal advertising of herbal concoctions. He is in custody pending prosecution.
Such offenders expose the unsuspecting population to health risks with their unverified claims. Such individuals sell substandard, fake, and counterfeit medicines
In Rubanda District, Mulore Town council, one Julius Tuesday of Smile Drug Store was apprehended for operating unlicensed pharmacy, and is held at Kabale Police Station pending prosecution.
In Kiruhura district, Isaac Muhurizi of Ampiri Community Medical Centre was apprehended for operating unlicensed pharmacy and being in possession of septrin and fansidar labeled “Government of Uganda” is held at Kiruhura Police station pending prosecution.
In Ibanda district, Rwenshuri Trading Centre, one Agaba Alex operating unlicensed drug shop (Rwenshuri drug shop) was found in possession of antimalarial (lumartem labelled “Government of Uganda) was arrested and is at Ibanda police station pending prosecution.
All the apprehended culprits must face the law under the provisions of the NDP/A Act as investigations regarding the source of medicines intended for public health facilities are still ongoing.
We call upon the public to join efforts with the Ministry of Health and NDA to always buy medicines from licensed drug shops and pharmacies for quality health care. The same applies to animal keepers in additional to consulting veterinary practitioners to improve their livestock health and income.
4. Conclusion
NDA appeals upon the general public to always seek advice from health workers and buy medicines from licensed drug shops or pharmacies. Not to buy medicines from hawkers because it is illegal practice and we cannot guarantee the quality of those medicines.
The general public should be on the lookout, and should not pay for medicines labelled, “Government of Uganda Not for Sale,” if you come across anybody dealing in them, please report to Police or NDA.
To livestock keepers to desist from buying veterinary medicines from unlicensed outlets, hawkers in shift markets and to always consult veterinary practitioners.
Apply veterinary medicine as advised by veterinary practitioners to guarantee health animals and wealth/income.
We extend our appreciation and thanks to public, the Uganda Police Force, Local Government leaders especially the District Health Offices, the Veterinary Offices and our parent Ministry of Health for their support during this ongoing operation, and appeal to the general public to be vigilant and report more of such cases on our toll free lines  0800 101 999  and 0800100066

Who is authorized to import vaccines into Uganda?
December 11, 2020