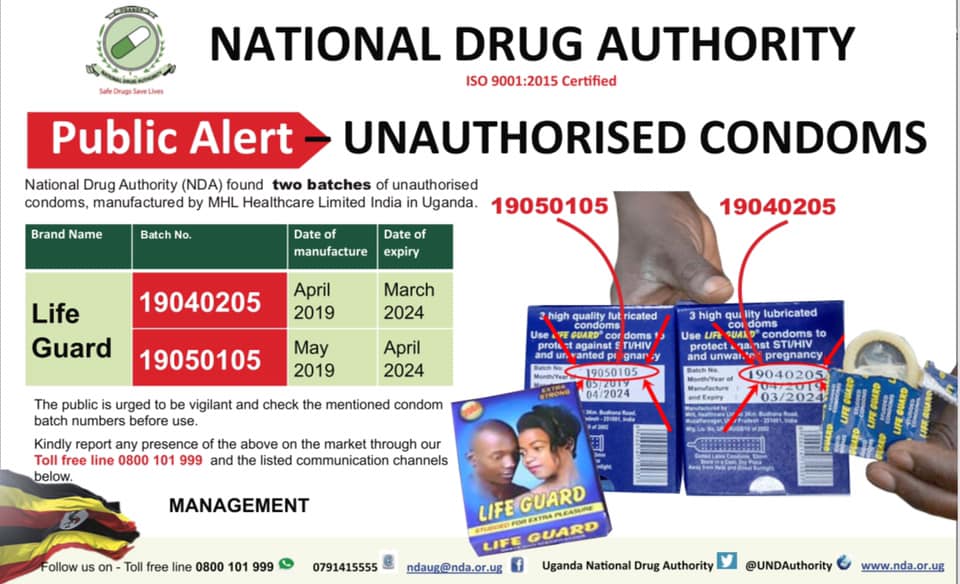 National Drug Authority (NDA) found two unauthorised batches of condom on the market during its routine surveillance. The condoms of the Life Guard brand had failed tests at NDA’s Quality Control Laboratory.  The first batch 19050105 contained a total of 503,520 imported condoms, which were manufactured in May 2019 and expected to expire in April 2024. The second batch 19040205 contained 497,751 imported condoms that were manufactured in April 2019 and expected to expire in March 2024.

Subsequently, a recall was initiated, and as of 21st November 2019, 70.8% of the consignment had been recovered, and NDA inspectors and the importer are in the field to retrieve the remaining 29.2% of these condoms.

Of the retrieved stock, 46% was destroyed at Luweero Industries Limited, Nakasongola on 31st October, 2019. The additional quantities retrieved are under quarantine awaiting destruction as the recall process from all regions continues.

Investigations regarding unauthorized release of these Life Guard condoms onto the market are ongoing, and any culprits that will be apprehended shall face the law under the provisions of the NDP/A Act.

All Condoms are subjected to mandatory analysis before release on the market. The analysis is carried out at NDA World Health Organisation prequalified Laboratory, which is also accredited by ANAB, USA, to ISO/IEC 17025 Standard. The importer is given a conditional release to quarantine the product until analysis results are provided by the laboratory.

NDA would like to assure Ugandans that the Ministry of Health and all its agencies are committed to ensuring access to safe, efficacious and quality medicines and health care products on the market.

The National Drug Authority (NDA) was established in 1993 by the National Drug Policy and Authority (NDP/A) Statute which in 2000 became the NDP/A Act. The objective of the National Drug Policy was to ensure the availability at all times of essential, efficacious, and cost-effective drugs to the population in Uganda as a means of providing satisfactory health care and safeguarding the use of drugs. The mission of the authority is to promote and protect public health through the effective regulation of human and animal medicines and health care products.

NDA current strategic plan 2016-2021; strategic priority 1,  safety, efficacy and quality, provides for strengthening post marketing regulatory systems through follow up on the medicines and health care products in the supply chain. In this regard, NDA has increased the number of surveillance and enforcement operations throughout the country.