For the last six years, the country has been facing the challenge of ticks not responding to drugs aimed at killing them. Ticks cause diseases that kill the animals, reduce milk production curtail reproduction and growth of animals. National Drug Authority has been central in proposing, supporting, coordinating the campaign against ticks and has contributed enormously to the short, medium and long term interventions geared towards solving this tick challenge by coming up with a policy guide on tick resistance to acaricides.

National Drug Authority together with its collaborative partners; Makerere University, College of Veterinary Medicine and Biosecurity scholars (Vudriko et al 2016 and 2017) have confirmed that ticks have developed super resistance to almost all the available 21 acaricides (amidines, pyrethroids, Organosphates and their combinations) on most farms in Western and Central Uganda cattle corridor districts while the same drugs are still killing ticks in the Northern and Eastern Districts. It is also believed that resistance may be spreading to areas without this multiple resistance due to movement of livestock in trade and by Government restocking programs.

The current field situation is worrying in that farmers in the affected districts have resorted to use of smuggled acaricides from neighboring countries which are not – registered in Uganda. These have also not worked as expected. Agrochemicals (Plant Chemicals) and public health chemicals are also currently widely being used for tick control. The safety of all these non-veterinary and smuggled in chemicals on the animals themselves, the farmers applying them and the public consuming the milk and meat from the treated animals is not ascertained / evaluated. This poses a risk to animals, the environment and the general public health. National Drug Authority has confirmed that some people are compounding their own concoctions with Agrochemicals and are being sold expensively to the unsuspecting farmers disguised as products from Rwanda. Use of these unknown chemicals will further complicate the situation leading to no solutions in the near future.

Although poor quality of acaricides has often been blamed, this has been dispelled by scientific research, continuous sampling and analysis of acaricides by National Drug Authority where since 2013 only three batches of acaricides have failed the quality test and actions taken appropriately to withdraw the failed samples. With effect from 2017, NDA has up scaled the quality assurance mechanisms that involve increase in sampling and testing of veterinary drugs and testing of 100% of the acaricides that enter the country.

Uganda is currently facing the worst episode acaricides resistance in its history leading to death of animals and therefore, threatening the future of livestock industry in the affected districts. There is no comprehensive program in place so far for continuous monitoring of this resistance to quantify the magnitude of the problem. This should be the work of Ministry of Agriculture Animal Industry and Fisheries. This therefore, complicates the situation and makes it difficult to justify the proposed interventions to solve the problem.

National Drug Authority has been undertaking support missions to farmers and institutions that are concerned with acaricide use. It has also gone ahead to fund studies and surveys on the challenge of acaricide ineffectiveness in the country. These have always revealed that bad farm practices in acaricide application are the largest contributors to the problem. NDA has organized several stakeholder meetings including a breakfast meeting in 2013 where HE The president, some members of the 9th Parliament, district veterinary officers and farmers from some affected districts. In June 2017 NDA wrote to the current 10th Parliament of Uganda committee of Agriculture, Animal Industry and Fisheries about this tick challenge to guide the policy leaders on the way forward.

NDA has been taking a lead and funding the formation of National Task Force to look into issues of acaricide resistance and proposing solutions. The National task force has been having members from multiple institutions whose roles are clear in the acaricide supply chain and they had come up with the following recommendations before the current Sate Minister for Animal Industry dissolved it which if implemented would go a long way to addressing the tick challenge we currently facing in Uganda, and the centers of implementation of the interventions were as per the policy on delivery of veterinary services (2001) and National Veterinary Drug Policy (2002):

Notice – ACARICIDES USE IN CONTROL OF TICKS

National Drug Authority (NDA) advises all animal farmers/keepers whose farms have not developed resistance to apply only NDA registered tick control chemicals / drugs (acaricides) as indicated the table below whose safety to animals, animal product (milk and meat) consumers and their impact on the environment, has been determined and evaluated using well drawn regulatory procedures including in country field trials (tests). The use of smuggled, non-registered acaricides, or agrochemicals that have not been evaluated and registered by NDA to control ticks on animals, exposes a health risk to both animals, human health and the environment. For those farms with super resistance, it is advisable to use Macrocyclic lactone in the group of Epirenomectins which will soon be registered. However, use of this drug should be following proper guidance from the Ministry of Agriculture Animal Industry and Fisheries on the proper zoning strategy.

Notice – REGISTERED ACARICIDES / DRUGS FOR USE IN CATTLE IN UGANDA

Addressing the challenge of acaricide resistant ticks requires involvement of all stakeholders. The proposed solutions will highly depend on ability to institute and enforce a uniform standard of acaricide application throughout the country in bid to delay resistance and increase the effective time of any particular acaricide. National Drug Authority as a regulator will continue to be advised by MAAIF, guided by scientific evidence from universities, research institutions and field experiences from the farmers and other field workers to ensure quality of acaricides in the country. We look forward to working with all other stakeholders towards effective control of ticks and tick borne

Ectoparasiticides and the challenge of Tick resistance

National Drug Authority controls the manufacture, importation, distribution and use of both human and veterinary drugs in the country. The three main concerns of veterinary drug regulation are quality, safety and efficacy (effectiveness). Veterinary drugs include acaricides which are the most important of animal drugs in terms of volumes and capital investment. Acaricides in Uganda are registered by NDA following well laid procedures that conform to international standards and following recommendation from Ministry of Agriculture, Animal industry and Fisheries (MAAIF), basing on pre-registration field trials on efficacy. These trials have always been coordinated by Ministry of Agriculture and carried out by the National Livestock Resources Research Institute (NaLIRRI). This ensures that NDA registers acaricides that are tested and confirmed effective in the Ugandan environment. In addition to the field trials NDA constantly monitors compliance to quality standards by random sampling and testing of acaricides on market using standard testing procedures at the NDA’s National Drug Quality Control laboratory. National Drug Authority also has a system of collecting information and giving feedback on the performance of veterinary drugs on market and in use – the veterinary pharmacovigilance function.

Acaricides on the Ugandan Market

These are imported by 15 licensed pharmacies and distributed to farmers across the country.

Starting in 2012, increasing losses of cattle to tick-borne diseases have been noted. Although poor quality of acaricides has often been blamed, only one case has been substantiated involving counterfeited DecatixTM in 2013. National Drug Authority and its partners have been undertaking support missions, visiting farmers and institutions that are concerned with acaricide use. These missions reveal that farm practices in acaricide application have largely to contributed the problem: Mixing of different acaricides together, changing them very often, using very low to very high concentration of acaricides, with wrong applicators, and prolonged use of one type of acaricide; and ineffectiveness and that ticks have gained resistance to acaricides

Evidence of tick resistance to acaricides

Super resistant ticks that are not responsive to all the molecules of acaricides on market have been identified on 68% of the farms that reported the problem in Western and Central Uganda in July 2016 and are believed to be spreading to other areas. This emergence of multiple acaricide resistant ticks and its implication on tick control in Uganda was also reported in January 2016 by Vudriko et al, 2016. No complaints have been registered from Northern and Eastern Uganda as yet, where tick samples collected showed susceptibility to all the molecules of acaricides on the market. This rules out quality issues as had been claimed earlier.

The National Task Force on ticks and tick borne diseases was formed in 2012 and re-activated on 13/04/2016 when the tick challenge resurged. This task force is led by Ministry of Agriculture Animal Industry and Fisheries (MAAIF) – Director of Animal Resources with 4 other government institutions participating, purposely to steer forward the implementation of the short, medium and long term solutions to the problem. The task force has operated through regular meetings hosted at NDA (the secretariat of the task force), and responded to farmer problems through field visits and the evidence based tick control approach. To date, the task force has made the following recommendations which if implemented will go a long way to addressing the tick challenge in Uganda. The centers of implementation are as per the policy on delivery of veterinary services (2001) and National Veterinary Drug Policy (2002).

All these will necessitate sourcing and pooling of resources to scale up the interventions so far made and transforming them into long term programs.

Addressing the challenge of acaricide resistant ticks requires involvement of all stakeholders including Local Governments. It should be noted that the issue at hand is not failure in regulation, but rather acaricide resistance, a natural phenomenon caused by factors some of which are beyond the mandate of NDA. Regulatory capacity is built over time, and in a resource limited setting, duplication of roles is very counterproductive. It should also be noted that the 8th East African Community Sector Council on Agriculture and Food Security (EAC-SCAFS) recommended single agency strategy for regulation of both human and veterinary drugs in the EAC partner States, the same trend adopted by other regional blocks in Africa and beyond. National Drug Authority as a regulator spearheading the campaign against acaricide resistance will continue to be advised by MAAIF, guided by scientific evidence from research and field experiences from the farmers and field workers to ensure effective regulation of veterinary drugs. 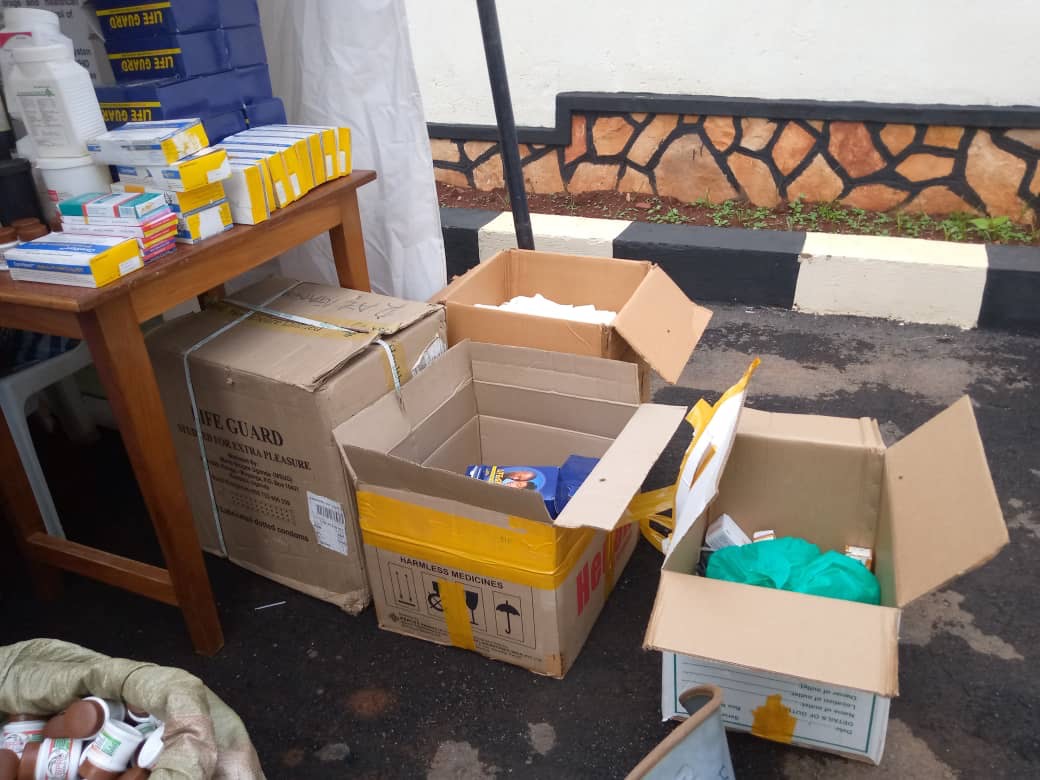